‘God Will Be Present However We Gather’ in Great Falls
Votes

‘God Will Be Present However We Gather’ in Great Falls 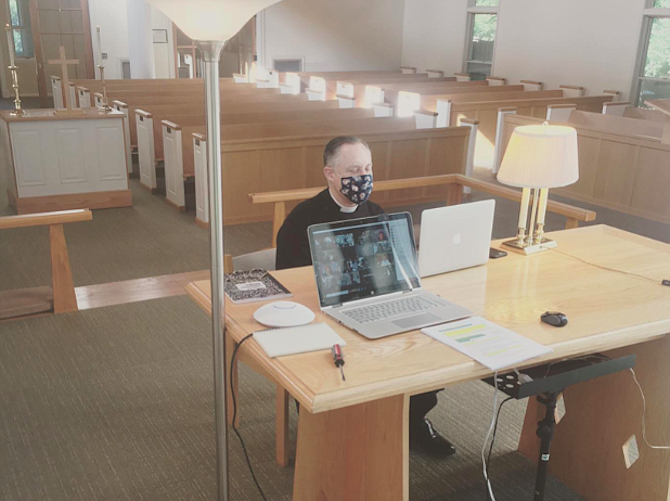 Pastor Hank Langknecht and Shirla Langknecht sing together in a live-streamed service on Easter Sunday. Ms. Langknecht sang the congregation’s parts in the hymns to help viewers follow along.

To Pastor Hank Langknecht of Christ the King Lutheran Church, the pandemic has meant more than just working from home. It has meant preaching to a “green dot” on his iPad, rather than to an in-person congregation; conducting confirmation programs over Zoom; and, at its most distressing, comforting grieving parishioners from a painful six feet away.

Religious communities across Great Falls are grappling with the pandemic’s changes to their spiritual practice—leaving many leaders wondering how to foster community in a time of physical isolation.

Some are finding connections in unexpected nooks of their remote practice. Pastor Langknecht has started a daily devotional morning podcast, which he streams from the church’s Facebook page, where community bonding has found a new locus: the comments section.

“There’s lots of back-and-forth and conversations going on there,” he said. “I’m leading worship, so I’m not sitting right in front of the screen, but there’s a very active community.”

Similarly, Reverend David Lucey of St. Francis Episcopal Church found that Zoom “breakout rooms,” in which participants of a Zoom meeting are subdivided into smaller videoconferences, have prompted parishioners to befriend others they ordinarily may not have.

“During virtual coffee hour, we break out into breakout rooms, and everybody says hello,” he said. “It has actually been joyous to watch people get to know each other.”

The remote setting may have even been conducive to community growth at St. Francis on Easter, when the church’s Zoom meeting drew a crowd even larger than their typical turnout.

“It was a really overflowing crowd, and I didn’t have to worry about where to seat them!” Lucey said.

Kimiya Sprengart, a member of the Great Falls Baha'i local spiritual assembly, said that the virtual setting has allowed the community’s outreach to reach a wider audience, causing it to grow both in terms of size and connectedness.

“It’s forced our community to be flexible in the ways that we invite people – for example, posting on Nextdoor...So, the level of participation has stayed the same or increased,” she said. “We haven’t really seen anyone in person, but we do feel closer in a way, because it’s a lot easier to participate from your own home.”

SINCE THE PANDEMIC HIT, the Baha'i community has started doing weekly devotional gatherings, in which members congregate for communal prayer and meditation, over Zoom. These meetings have been filling a social need in many practitioners’ lives, she said.

“The devotional gatherings are thriving,” she said. “People are really seeking another way to connect with other people, and one of the best ways to do it is through sharing writings, and poetry, and song, and praying together,” Sprengart said.

Still, operating remotely has its challenges. Rev. Lucey said that the virtual setting requires “more intimacy” in each of his sermons.

“The [virtual] medium lends itself to almost being personal, as opposed to the usual preaching moment, where you’re standing in front of a group of people. It’s physical presence, yes, and yet it doesn’t require the same level of personal attention to each person that you think you’re talking to,” he said.

Some elements of the church’s usual spiritual life are lost in translation, he said, but not all.

“I have parishioners who are hungry for communion, and this is the longest I’ve gone, since I started taking communion, to be without it,” he said. “I’m hungry too, and yet I have been fed in many different ways.”

Pastor Langknecht said that the lack of an in-person Sunday mass has made it difficult to keep in touch with church members who do not attend remote services.

“Sunday morning, gathering at church, was really central to keeping a community sense about us,” he said. “It’s not hard to keep the core community together, but it’s the second rim of people, who are not as active in community work, that we really don't know where they are or how they’re oriented.”

In response, Christ the King is taking new measures to maintain connection. The church’s leadership council is about to hold its second “every-member check-in,” in which it calls all of its member households “just seeing what’s up.” It also mails materials to congregation members who do not have the computer literacy to attend remote services.

St. Francis has also been making outreach efforts, Rev. Lucey said, but there are certain scenarios when the closeness of human contact just has no substitute. Four of his congregation’s parishioners, or parents of parishioners, have passed away in the past few months, and the requirements of social distancing have been agonizing.

“What goes on at a Christian funeral, is that people connect to each other. They want to embrace, and they want to be close; they receive comfort in their loss,” he said. “The kind of saying goodbye that all four of these parishioners would have had is just diminished in many ways.”

Also weighing on Rev. Lucey is the need to balance self-preservation with a desire to connect with those around him—a dilemma made even more difficult by his status as a religious leader.

SEVERAL MONTHS into remote operation, communities have already started adapting to the new normal. Rev. Lucey said that the congregation has modified the Episcopal practice of dismissal for a remote setting: parishioners unmute themselves on Zoom and say their traditional “alleluia” at the end of a service.

The Baha’i community is also growing accustomed to the online format, now using Zoom’s “screen-sharing” function to display worship texts during devotionals and Feasts. This is just one of the many silver linings that Sprengart sees in the online format.

“It’s definitely a difficult time, but I think that it’s allowed us to become a lot more creative in the ways that we worship. So it’s a blessing in some ways, too,” she said.

In some ways, Pastor Langknecht has even found it “energizing” to adapt to the new situation.

“It has been energizing and interesting to figure out how to do all the things you need to do—with feeding the hungry, and being involved in social action, and getting the Christian message out there—under these circumstances,” he said. “It’s been fun to rise to the challenge.”

And, as the months of physical isolation draw on, Rev. Lucey said, his conviction grows stronger that despite the pandemic, “God will be present however we gather.”