Clashing and education about dimming the night sky around Great Falls Observatory. 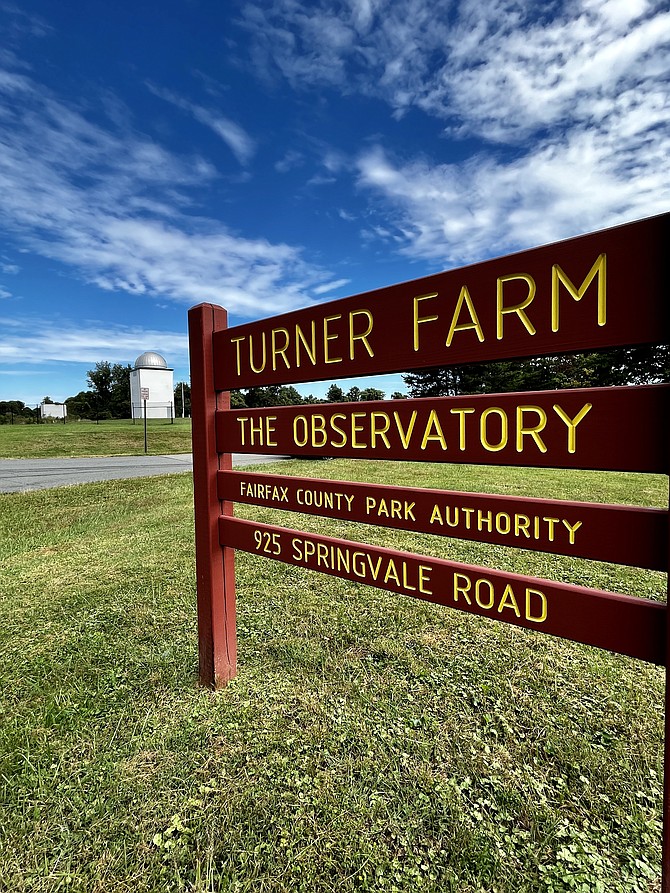 There are only a few remaining places in Fairfax County where a child looks up at night, and it is not under the washed-out dome of light pollution. More than likely, they cannot see the dark skyscape similar to that viewed by their great-grandparents when they were children. Thousands of stars and constellations are not visible in 2022, and if the moon is bright and the shine of human-made items on Earth's surface is scattered into the night's atmosphere, known as "sky glow," they cannot see planets or the arced band of the Milky Way Galaxy.

On Sept. 19, the Dranesville District Office of the Fairfax County Board of Supervisors and the Great Falls Citizens Association co-sponsored the Second Dark Sky Preserve Town Hall Meeting in a virtual series. Presenters discussed a proposal by county staff for a zoning amendment to minimize glare and overlighting around the Turner Farm Observatory in Great Falls to protect it from light pollution. The First Dark Sky Preserve Town Hall Meeting was held on March 23, 2022.

The meeting's presenters offered solutions to enhancing dark skies, such as shielding lights and using amber lighting, not white lighting. 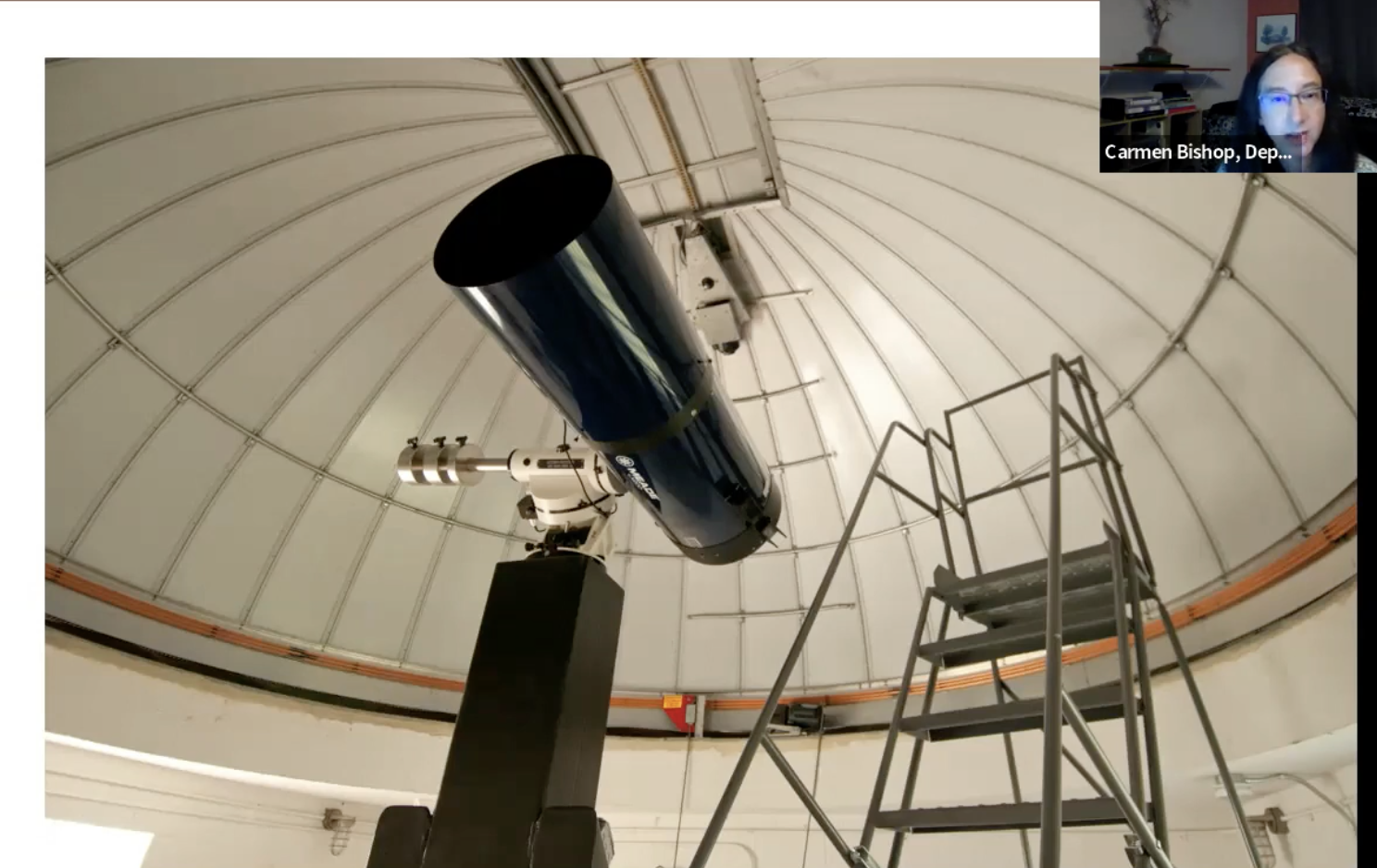 According to MPO Katy Defoe, Reston Crime Prevention, Fairfax County Police Department, lighting is one piece of the puzzle and does not solve all security issues. Other measures are available that will announce activity, such as motion detectors. A homeowner's first concern centers on what one wants to see, which is different in every situation. Lighting should have a clear purpose, be directed only where needed, be no brighter than necessary, and be used when it is useful. If possible, the use of warmer-colored lighting is better. "What we've talked about frequently in crime prevention is if you light it, they will come," Defoe said. Over-lighting is not security lighting.

"Sky glow does limit the effectiveness of the telescopes and the programs that take place there. Additional zoning regulations may be appropriate in this area," said Carmen Bishop, senior assistant to the zoning administrator at the Sept. 19 town hall. She noted the Observatory is the only one in the county to which zoning regulations would apply. They would not apply to the observatory at George Mason since it is under the jurisdiction of the State of Virginia.

According to presenter Peter Plavchan, the director of George Mason Observatories and associate professor of physics and astronomy, light sources emit energy, and different light sources produce different colors of the rainbow or spectra. Plavachen said nighttime light pollution is when the Earth's atmosphere scatters or spreads out light, preferentially blue light, moonlight, and starlight. "Improperly shielded light fixtures and light reflected off the ground go up into the earth's atmosphere, and some of that gets scattered back down like dim, continuous fireworks."

According to Supervisor John W. Foust (D-Dranesville), the Fairfax County Board of Supervisors revised the county-wide lighting standards in 2020 to better address glare and light pollution. Per Va. Code 15.2-920, the Board approved a follow-on motion that directed staff to research and analyze zoning rules to protect dark skies around astronomical facilities. 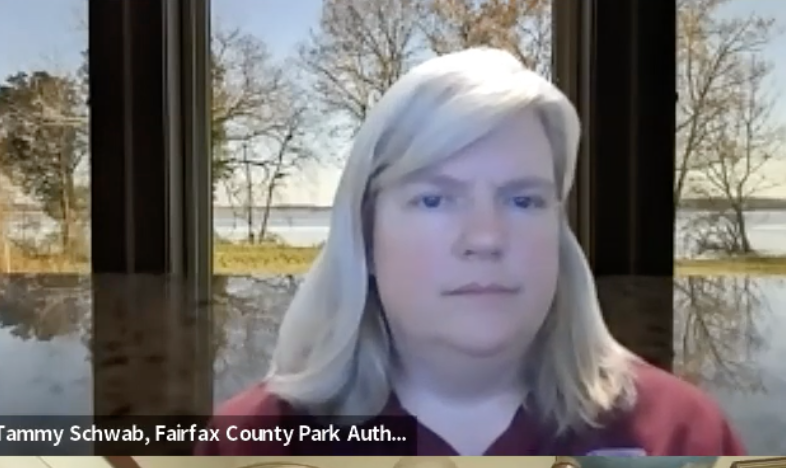 The preliminary concepts document on the county's proposed Zoning Ordinance amendment topic dated Aug. 31, 2022, details the current effective (5109. Outdoor Lighting section  02/23/2022) and the proposed Draft Zoning Ordinance Text for Discussion to support dark skies around the observatory while also maintaining the flexibility to install lighting as needed for safety, security, and nighttime visibility.

Carmen Bishop, deputy zoning administrator with the county's Zoning Administration Division, said that from 2021 to now, the zoning ordinance amendment process is in the research and community outreach state. According to the Fairfax County website, “Research and community engagement will continue, potentially leading to authorization of the amendment later in the fall or winter of 2022/2023.”

Carmen said that the proposed Draft Zoning Ordinance Text for Discussion, subsection 5109.5, covers the half-mile area of parcels surrounding the observatory and would be subject to subsection 5.

The two options for lawfully existing lighting are that it is allowed to remain indefinitely and requires all lighting to comply within a specific timeframe, such as five years. Carmen also said that grandfathering would let lights that are already legal stay up even if they don't meet the proposed new rules.

Foust said as part of the community outreach effort, in the spring of 2022, the county sent out 521 postcards to people who might be affected directly by the regulation. The postcards told them about a survey that would be open from March 24 to April 24 and asked all property owners in the proposed amendment area for feedback. According to a county document available online, 30.7 percent took part. Asked if they believed light pollution was a problem in their area, 68 percent responded "no," 24 percent "yes," and 8 percent said, "I don't know." Asked if they supported additional limitations on lighting within the half-mile around the Observatory to protect it, 50 percent said, "no," 41 percent said "yes," and 9 percent said, "I don't know."

Jeffrey Kretsch of the Analemma Society said that people come to Observatory Park for the hands-on experience of observing and classes. The park has seen over 7,500 visitors in the last four years, according to Kretsch.

The Observatory contains a roll-top with multiple telescopes and a former National Defense Mapping Agency observation tower that will be converted into a remote access telescope observatory. It offers classes, summer camps, and scout badges.  Weather permitting, the Observatory is free to the public on Friday nights for viewing, with no registration needed. The Analemma Society provides volunteers to open the park during eclipses and comets. Currently, the Observatory is working towards becoming an International Dark Sky Association Urban Night Sky Place and a leader in dark sky preservation and value-centered lighting.

Tammy Schwab, the Park Authority's manager for education and outreach, said that they are increasing the efforts county-wide in support of dark skies. Schwab explained how the county is "walking the walk" and doing its part to support dark skies. The Park Authority is in the process of switching to amber-colored lights (not orange) for the outdoor ballasts at the Observatory. Evidence shows that lighting with amber reduces light pollution and is a safer, viewer-friendly environment than white lights with their disability glare and a reduction in visibility. She added that the county applied to the International Dark-Sky Association to designate the area around the observatory as an Urban Night Sky Place.

Foust: Regarding zoning ordinance enforcement, eminent domain would not be the remedy; the most likely enforcement remedy would be a fine for failure to comply.

How much impact do vehicle lights have on dark skies?

Plavachen: Vehicle traffic is minimal at night. It peaks around rush hour and then tapers off significantly from there.

Could the proposal be scaled back to one day per week?