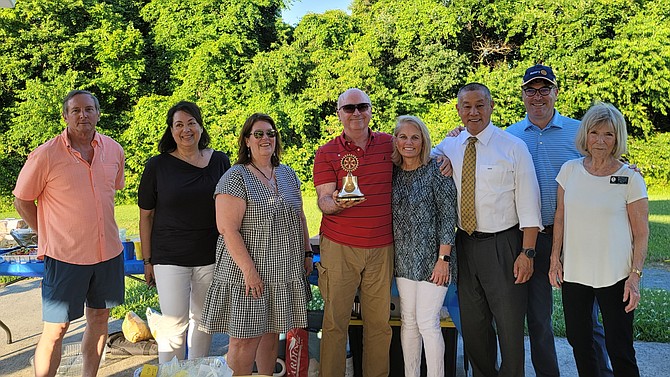 The Rotary Club of Great Falls held its annual meeting on June 30 at the Turner Farm Park Gazebo, operated by the Fairfax County Park Authority. Incoming President, Michael Broyles, wanted to have the event at a Fairfax County park where the Rotarians could celebrate in a fun and relaxing setting while also promoting one of the causes of Rotary International, protecting the environment, according to June Melloni Kelly.

The Club recognized Captain Frank S. Smith III and Rotarian June Melloni Kelly, Ph.D. Smith received the Citizen of the Year Award. It honors a non-Rotarian living in the community who exemplifies "Service above Self," the motto of Rotary. It is awarded to an individual who is an outstanding member of the local community whose accomplishments, actions, and character have directly benefited the citizens of Great Falls and the surrounding area.

"This award is a pittance compared to the service Frank has provided (the) local community," said Michael Broyles, incoming president of Rotary of Frank Smith. "We appreciate his service and are honored to award him Rotary Citizen of the Year," he said.

According to Broyles, 2022 marks Smith's 50th year of service to the Great Falls Volunteer Fire Department, Station 12. Smith leads the department and is an advocate for community safety. Since 1973, Smith has been involved in emergency services, and although he has retired three times, he hasn't quit. As a Great Falls resident and through the Fire Department, Smith remains actively involved. He can be found interacting with children at the Gazebo, training his search dog, Recon, at the Grange, and responding to assist the public as the lead paramedic on Fairfax County Medic 412E. Smith is a life member of the Great Falls Volunteer Fire Department and a paramedic instructor at the Fairfax County Fire & Rescue Academy. Smith served as a Chief Petty Officer in the U.S. Navy, was a Partner at Ernst & Young, and was SVP & Chief Information Officer at Booz Allen Hamilton.

Melloni Kelly received the Club's Rotarian of the Year 2021-22 in recognition of her outstanding demonstration of Service Above Self; principled commitment to the 4-Way Test; contributions to the mission and operation of the Club through each of the Rotary Avenues of Service; and for promoting Rotary by her actions and involvement.

"June is an amazing example of Rotary's motto, 'Service Above Self.' She does so much for the community with an emphasis on creativity, impact, professionalism, and quality.  We are delighted to recognize her as Rotarian of the Year," said Gary Pan, president of the Rotary Club of Great Falls (2021–22).

According to Broyles, Melloni Kelly is one of the most active Rotary club members. Her many efforts highlighted spearheading an awareness program for opioid use disorder. She was the interface between Rotary and Fairfax County's Opioid and Substance Use Task Force. Melloni Kelly staged a local opioid conference with keynote speakers, such as William Hazel, former Virginia Secretary of Health and Human Resources (2010–2018). Melloni Kelly worked with the Fairfax Prevention Coalition and a local CVS shop to install a drop box for safely disposing of unused or expired medications.

Melloni Kelly assisted in recruiting new Rotary members and promoting Rotary in the business community. Outside of Rotary, Melloni Kelly has effectively raised funds for several nonprofits and causes in her service role as vice president of philanthropy at the Women's Club of Great Falls. Recipients included Artemis House-Shelter House Inc., SafeSpot Children's Advocacy Center of Fairfax, and Friends of Riverbend Park Friends.

Melloni Kelly is the founder and CEO of Melloni Enterprises, LLC. She is a senior author and co-author of eight award-winning medical reference books and supplements and is known internationally for her work.