Does felling the tree prevent risk of injury or death? 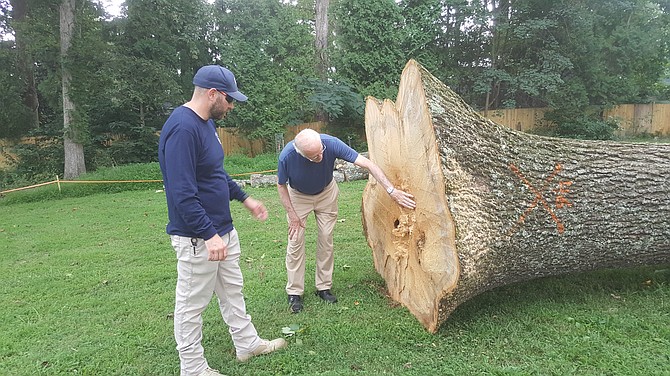 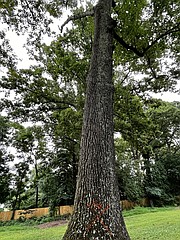 A majestic oak tree next to a playground on Fairfax County Park Authority property behind the Grange Hall on Georgetown Pike in Great Falls developed what appeared upon examination to be root fungus. The towering beauty of the oak grove seemed to be a robust tree, the largest in the grove. However, the untrained eye can be deceived by appearances and a lack of knowledge.

Its base splayed outward with fat, blackened, and calloused roots. Its crown was thinning with broken branches, and deep within the tree, its core was turning to sponge.

According to Robert Vickers, the Dranesville representative on the Fairfax County Tree Commission, the Park Authority announced on Tuesday, Aug. 23, that the oak would be cut down two days later, Thursday, based on an evaluation and proximity to the nearby playground.

A common root fungus can cause extensive decay in tree roots, rendering them incapable of supporting the tree. Davey Tree Service cut down the tree. Vickers, Jerry Peters, environmental and parks committee member of the Great Falls Citizens Association, and others went to the site.

"Did it have to come down?" Vickers questioned after the fact. "It probably could have lived for a few decades more," he said. "But the rot at its base was real, and risk to the playground was too great."

Later that afternoon, Peters returned to the scene with several small lawn marker flags with 15-inch steel wire posts. He pushed several of them into the wood near the tree's hollowed cores. The wires from the markers vanished into the spongy wood. An erratic gray line, as if drawn by a marker on the slab, extended in circular patterns in at least two sections of the trunk's slab, near hollowed cores, indicating the extent of visible decay outward from the center. Internal rot symptoms can include mushrooms growing around the tree's base after rain, branches falling off, a thinned crown, and discolored leaves.