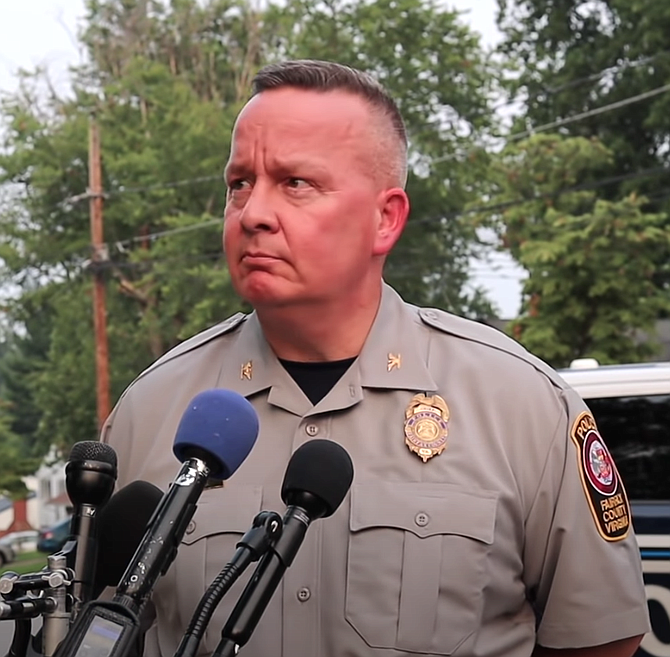 FCPD Police Chief Kevin Davis near the group home where an officer shot and critically wounded a resident. Screenshot

On Monday, July 19, officers were called to a home in the 8000 block of Gosport Lane, in Springfield, a group home close to Ravensworth Elementary School.

Shortly before 5:30 p.m. on Monday, a 911 call describing someone acting erratically, throwing things and threatening to harm herself and the other occupants of the group home, Chief Kevin Davis said in a briefing.

This group home in Springfield is known to the Fairfax County Police Department, he said, who have responded to other 911 calls there.

The two officers arrived to a chaotic scene, and entered through the back door. “They were confronted and advanced upon by a woman with a large knife,” Davis said.

Both police officers had their body cameras activated. The woman who was shot was 30 years old. There were four people in the house at the time, including a caregiver who was the one who called 911 looking for help. No police officers were injured, nor were other occupants of the group home.

In an update on Wednesday, police said the 30-year-old Springfield woman is in custody and remains hospitalized.

Davis answered a question from a reporter at the scene about whether the police had less lethal weapons at the time by repeating the assertion that the woman was advancing with the large knife and refusing to stop.

Davis declined to name the officers involved; he said the officer who shot the woman was a veteran officer. He said the body camera footage would be released in “due time.” Police said in a Wednesday update that the name of the officer will be released within 10 days, unless the Chief of Police determines there is a credible threat to the safety of those involved or if additional time is required to thoroughly complete the risk assessment process.

In the Wednesday update, police said the officer involved is a 14-year veteran who is assigned to the Special Operations Division. The officer has been placed on a restricted duty status pending the outcome of the criminal and administrative investigation.

A criminal investigation into the use of force is being conducted by the Major Crimes Bureau. Police will release footage from the Body-Worn Camera and the 911 call for service “when it no longer jeopardizes the integrity of the investigation.”

The Internal Affairs Bureau will conduct an administrative investigation, along with an independent review by the Independent Police Auditor.

All information provided in this release is based on preliminary investigative findings and may be subject to revision as the investigation progresses.

National Night Out Is August 3

On Tuesday, Aug. 3, is National Night Out. This annual event brings neighborhoods and law enforcement together to send the message that we are all working together to prevent crime and keep communities safe. Officers will stop by to meet members of the community and build police-community partnerships. Families can spend the evening outdoors with food, music and activities to promote neighborhood comradery.

UPDATE: MALICIOUS WOUNDING/ACCIDENT HIT AND RUN: 7900 block of Janna Lee Avenue, 7/5/21, 5:05 a.m. After a dispute, a woman drove into a man and pinned him against a car before driving away. The man was taken to a hospital with injuries that were life threatening. Tennida Ferguson, 45, of Alexandria, was arrested on July 12 and charged with malicious wounding.

ROBBERY: 6300 block of South Kings Highway, 7/11/21, 11:23 p.m. Two men approached the victim as he exited a store, assaulted him and took property. The victim was treated at a hospital for injuries that were not considered life threatening.

STOLEN AUTO/MALICIOUS WOUNDING: 7900 block of Central Park Circle, 7/13/2021, 3:21 p.m. Officers located a stolen white BMW X3 parked in the neighborhood. As officers pulled in behind the car, the driver drove the car in reverse, striking the officer’s car. Three men ran from the car and the driver, Jonathan Santos Ayala, 19, of Falls Church, was taken into custody after a short foot pursuit. Santos Ayala was charged with malicious wounding and receiving stolen goods. No injuries were reported.